in 1947, there were many members of Pittsburgh Presbytery that felt the Presbytery needed its own camp and conference site. At this time, Dr. Hugh Thompson Kerr of the Shadyside Presbyterian Church announced that he had command of $25,000 from the estate of Miss Margaret Pfeil.

The first meeting of the Board of Managers for Crestview was held on November 18, 1947 at the Duquesne Club of Pittsburgh. There were work camps held at Crestview in the summer of 1948 to begin transforming the farm into a camp. The following summer of 1949 saw an eight week schedule for Juniors and Junior Highs2.

The next few decades brought about significant change for Camp Crestview. When the Presbyterian Church in the USA and the United Presbyterian Church of North America merged to form the UPCUSA, the Board of Crestview was incorporated into the Pittsburgh Presbytery Camp Association. In 1959, Jack Lewis was hired as the Crestview Administrator to handle the camp and conference programs. Mr. Lewis initiated many new camping programs to reach the diverse population of Pittsburgh Presbytery. For senior highs, off-site programs such as canoeing, trailer trips, trail hikes, and sailing were started. Family Camps were successful and year-round use of the facilities for retreats and conferences became possible due to the winterization of most buildings around the existing campus. In addition, 80 acres of land were purchased in 1961 and the total acreage increased to 208 acres in 1967.

In 1969, Camp Fairfield became part of the Pittsburgh Presbytery Camp Association. Crestview and Fairfield were included in the Presbytery budget as part of the Presbytery’s Causes. One Board and two Resident Directors were established. Due to the high cost of operating two different camp sites, the Presbytery was forced to make some important decisions in the mid 1970’s. Because of its proximity to Interstate 79 and McConnell’s Mills and Moraine State Parks, Crestview was chosen as the property that the Presbytery would concentrate its efforts to provide quality camp and conference facilities. Between the end of the 1976 camping season and before the 1978 camping season, Camp Fairfield was sold to increase the efficiency of the Presbytery’s camp and conference program. At this time, the Rev. Peter Surgenor was hired to act as the Resident Director for the newly named camp in Slippery Rock. CRESTFIELD was named to honor the tradition of both camps (CRESTview + fairFIELD).

New cabins were constructed in 1981, while the Main Lodge was renovated to improve the dormitory style rooms. The meeting rooms located in the Recreation Hall received new walls, paint, wood stoves, and restrooms.

In early 1984 a significant renovation of the Recreation Hall was completed. This included an updating of the restrooms, a kitchenette, handicapped shower, and interior paneling. In the fall of 1985 a new septic treatment system was installed, and dedicated at the Harvest Day celebration in 1985 with the now infamous poem titled “Ode to the Commode” written by Elder Joan Humphrey of the Wallace Memorial Presbyterian Church.

As programs and retreat users increased throughout the 1980’s and early 1990’s, the Board for Camp Crestfield began to vision into the future to see how Crestfield could better serve its constituents. Through much prayer, hard work, and diligent fund-raising, the newly constructed Scott Lodge (named in honor of the Rev. Dr. Harold Scott, Executive Presbyter of Pittsburgh Presbytery) was opened for use in the fall of 1999. This comfortable and modern conference facility consists of twenty-four hotel-style rooms that are fully heated and air-conditioned with private baths for each room. Scott Lodge truly transformed Crestfield into a modern conference center as well as a summer camp and retreat center.

In 2013, another capital campaign was undertaken.  This campaign enabled Crestfield to build two modern cottages, which can house up to 40 people each.  The campaign also was able to finance a renovation of the Recreation Hall, now called Ed’s Place (named in memory of Rev. Dr. C. Ed Bowen), into a flexible, modern meeting venue.

In 2016, Crestfield Camp and Conference Center took the bold step to become its own independent 501c3 non-profit corporation.  This move allows Crestfield to envision new ways of becoming a premier camp and conference center throughout Western Pennsylvania and Eastern Ohio.  Today Crestfield is a vibrant ministry mission outpost which is ready and willing to serve the spiritual, education, and conferencing needs of a new generation. 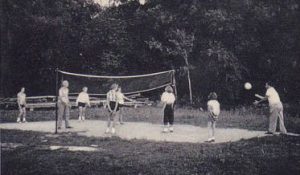